Grateful thanks to recent sponsors:

Mark Johnstone - sponsor through Patreon and Buy me a Calvados (ahem, Coffee)

Hannah Gray - sponsor through Buy me a Calvados (ahem, Coffee)

My father, Willi, was 13 when the Nazis took him away from his parents under the pretense of protecting him. Instead, he was molded into cannon fodder in WW2 for use against the Russian army. He was sent to the Eastern Front in the last days of the war, and was never expected to return alive. Having survived against all odds, my father gives an eye-witness account of the devastating effects of war from his unique perspective as a child soldier. I have written a book, as yet unpublished, in memoir form, transcribed from audio tapes he narrated in German and from my many conversations with him. I strongly believe his story should be shared with the public due to its relevance to current events.

After I had pestered my father for years to record his memories as a child soldier in the Nazi army, he finally agreed and narrated his story, in German, on cassette tapes, which he converted to audio CDs and sent to my sister and me in 2007. After I got them, I listened to them once and, feeling I had somehow accomplished my goal, sat on them for the next nine years. In 2016, the realization set in that my father was 86 years old, one of the last living soldiers of World War II. He lived in a nursing home and was not doing well. How much time did I have left to ask him questions?

Over the next year and a half, I made weekly phone calls to my father and interviewed him as much as I could on his story. He willingly agreed and was pleased that I expressed interest and wanted to know more. Unfortunately, his health was rapidly declining and he, who had always had a prodigious memory, could not recall certain things anymore. I could sense that other memories were just too painful for him. I did not want to press him and make him relive the trauma of war in the twilight of his life just to satisfy my curiosity, not unless he volunteered the information. Sometimes when I would ask him a probing question about the war, he would get very quiet and eventually he’d say in a soft voice that seemed to come from far away: “I don’t remember”.

Nevertheless, I was able to fill in many gaps that complemented the taped recollections of the harrowing experience that so deeply traumatized him. In the process I came to understand that his emotional distance as I was growing up was a wall he had built to bury his pain. He had had to contain the dam to move forward.

I tell my father’s story in his own words, without judgement or apology. His is the report of an eyewitness and unwitting participant in the horror of the Third Reich, seen from his perspective as a child in the second world war. Willi, bottom left, dressed as the girl which his mother really wanted. Age 3. 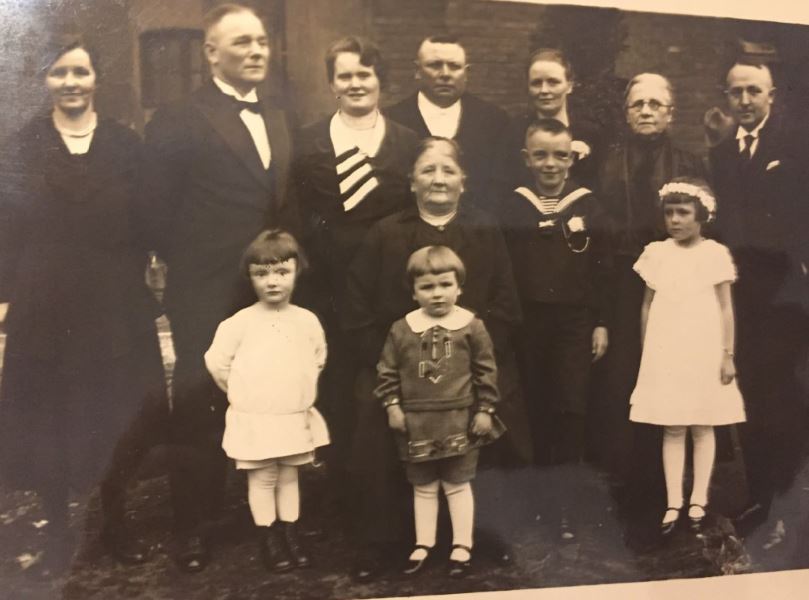 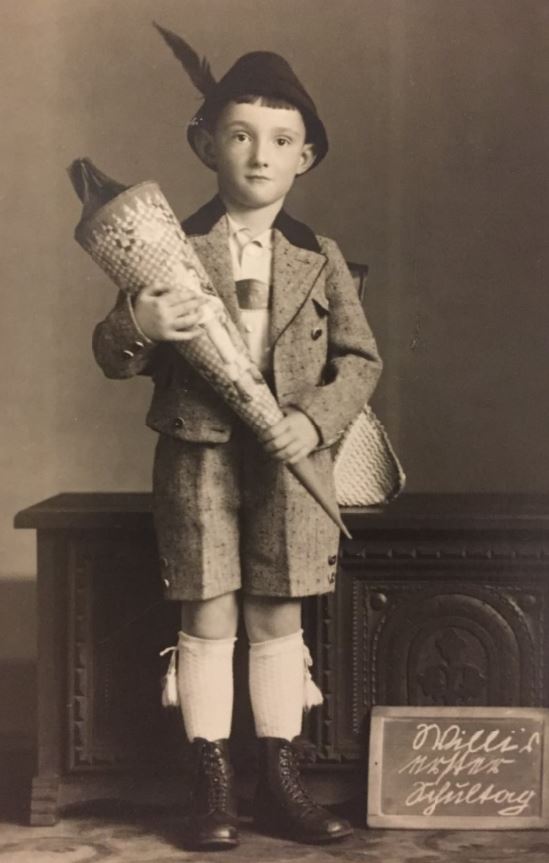 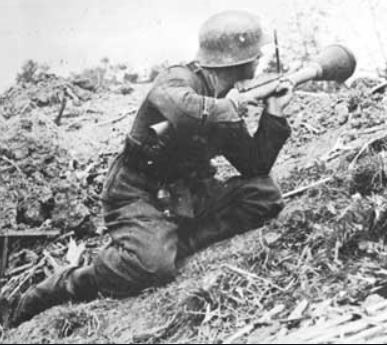 Belowis the picture of my dad with his parents. This is a very peculiar picture. It was taken in 1944 on the occasion of my grandfather's name day (you may know Catholics celebrate their name day), when my father was nowhere around his parents, as he had been taken away to Konstanz in 1943.

How was it taken you ask? Well, you may recall that in my book, my father describes getting his first suit sometime in the Spring of 1944, sent by his parents to him in Konstanz, for his "coming of age", and Mrs. Vollmar took a picture of him in his suit, standing on the balcony. Mrs Vollmar then sent this picture to my grandparents. Believe me, I grew up looking at this picture many times. Last year, when I looked at the date which was noted on the back of the picture (I had never before looked at the back of the picture), with the mention of my grandfather's name day, I realized the date was impossible. When I mentioned this to my mother, she matter-of-factly told me "that's because the picture was photoshopped of course". They wedged my father's image from his picture taken in Konstanz into a picture of my grandparents.

Now that I know it, I can see it, but it would have never occurred to me in a million years. I have to say, they did a pretty good job for the times! There are no other surviving pictures of my father in his late childhood and early teenage years. There is a gap between ages 6 and 16. The pictures of his childhood were all burned when the house was destroyed by a bomb. The few surviving pictures came from relatives who happened to have them.  Heidi. 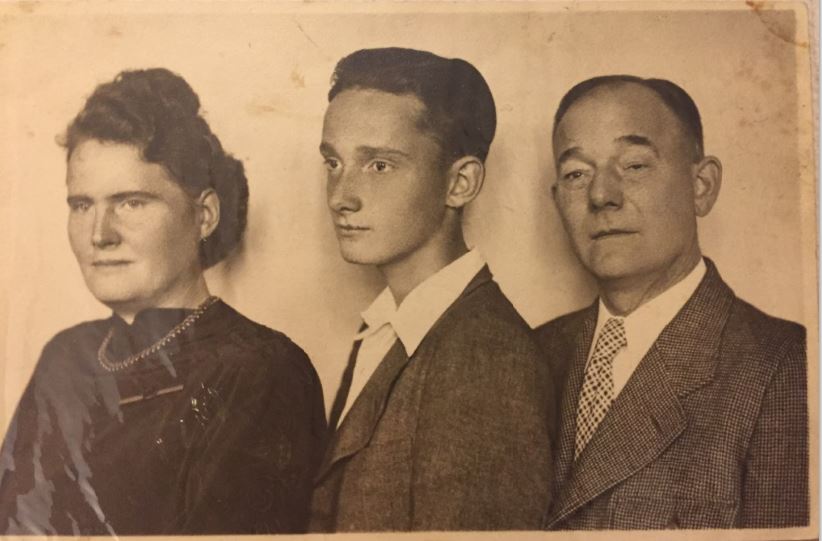 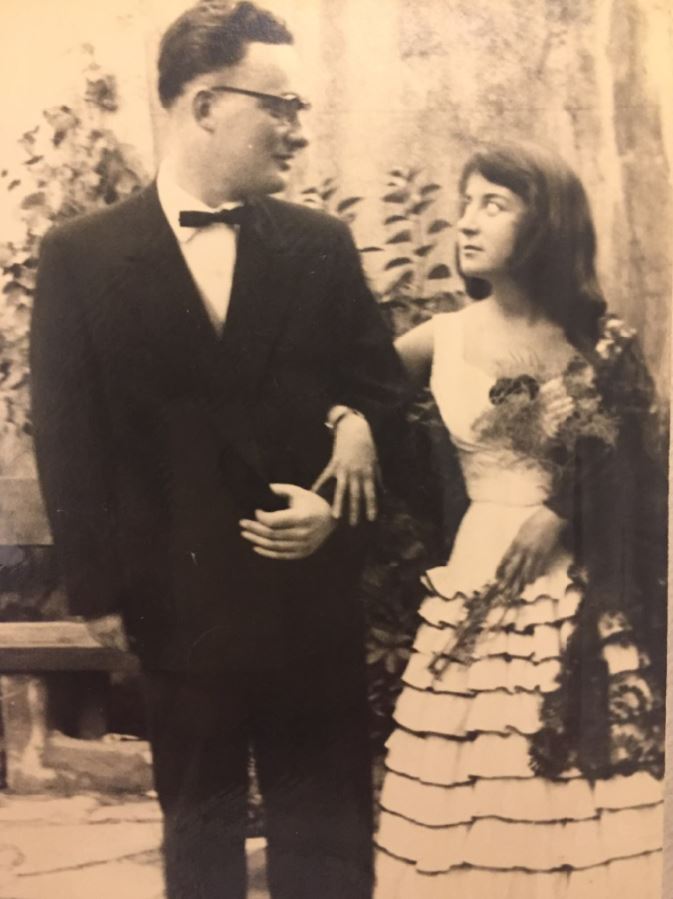 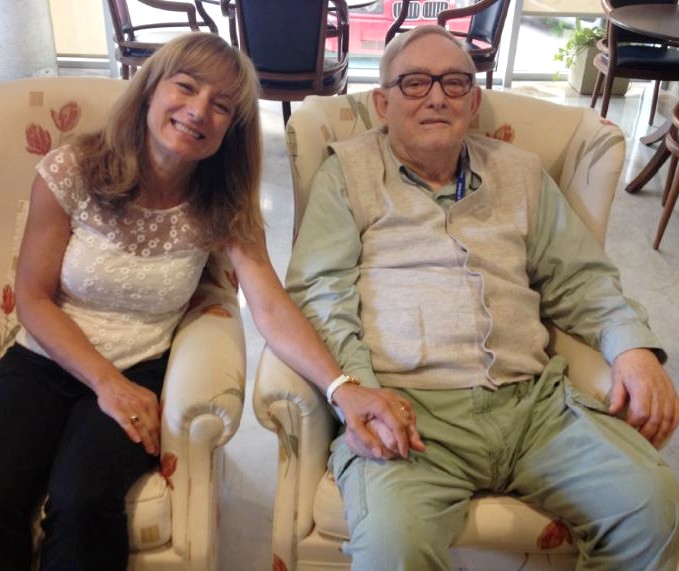 Papa and I were walking to the train station where he worked. The dawn sky had an orange glow. It was a strange color, and it seemed to come from behind the buildings in the distance. There were faint noises I could not recognize, but they didn’t sound right. I slowed my pace down a bit. Papa pulled my arm, walking faster. His hand gripped mine so tightly it hurt. It scared me.

“Hurry Willi, quick, let’s go. There is something going on here in which I don’t want to get involved.”

One night a kid from our group snuck into the SS depot and swiped some butter and ham. They caught the kid red-handed. It turned out that stealing from the SS carried the death penalty by firing squad.

We stood in the holes we had dug. In each of them stood a man, or a fourteen-year-old boy like me. Each man had four Panzerfaust anti-tank rocket launchers. We waited in oppressive silence.

Suddenly there was a Russian in front of me.

He pointed his bayonet and thrust it toward my belly. I quickly grabbed my Sturmgewehr, which was slung over my shoulder, and shoved it at his bayonet, blocking it …