He was killed in Sicily in 1943. Dad's written diary suggests he was killed on 10 July but the CWGC entry says 11th.

Dad's diary written at the time: 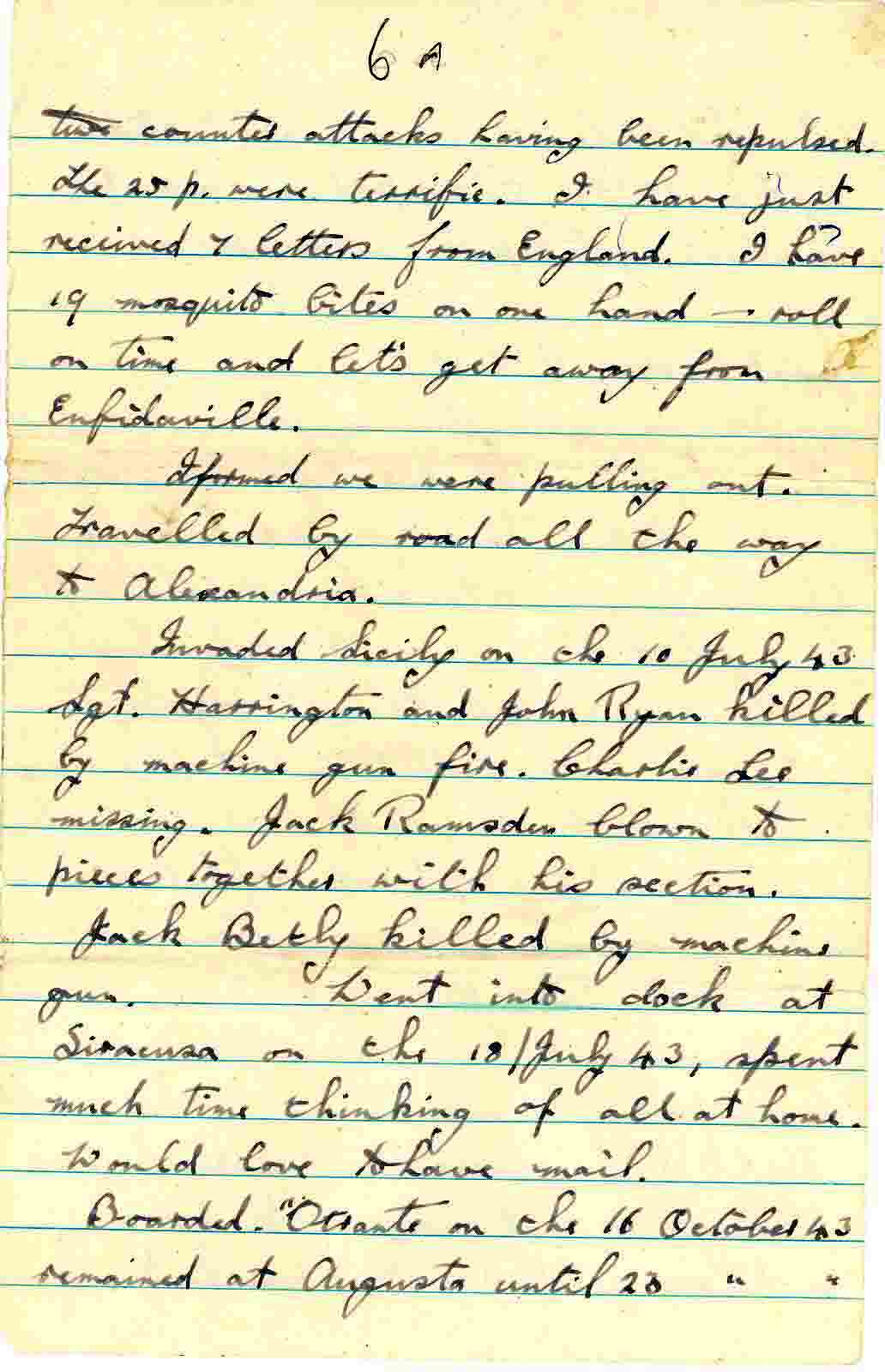 Link to all Diary pages

Johnnie Ryan was a good pal of my Dad's who enlisted at the same time. Both came from Southbank, Cleveland. Johhnie was killed by machine gun fire 11 July 1943 in Sicily. Aged 23. He is mentioned in Dad's WW2 memoir and also in his war diary page below.

"I always knew about my uncle, although I was born 15 years after he died. My grandparents had a big photo of him in uniform hanging over their fireplace when I was a kid. Also, my Dad has the telegram his sister sent telling him that Johnnie had been killed in action. At the time Johhnie was killed, my Dad (Tom) was in training as a Cromwell tank driver and eventually went to Normandy in July 1944 and made it all the way to Berlin.

My Dad always believed his brother was killed on 10th July and had in fact written that in his bible he kept with him at the time and still has, so was quite surprised to find out it was 11th! When I read the bit on your website taken from your dad's diaries, I discovered Johhnie had been killed by machine gun fire which as far as I know the family weren't aware of, so thanks for that. Dad has a corkscrew that he still uses which he says Uncle J told him he'd picked up in a bar near Dunkirk, so again, he was probably there."

Jack found out from her Dad that Johnnie Ryan signed up for the Terriers around his 18th birthday which would have been end of March/start of April 1939 into A Company. He worked at the time at Bannister's butchers in South Bank. Bill Cheall also lived in South Bank and signed up April 1939. Their two army sevice numbers are very close to each other:

Jack also learnt this story from her dad:

"Johnnie was first sent to France (via Yvetot near Le Havre) and then on to the area around Lille before moving into Belgium. He managed to make it to De Panne and Dunkirk and was taken off the beach by a paddle steamer (which he says may have been the Royal Daffodil. I've looked it up and it was actually a propeller ship but its sister ships were both paddle steamers). Apparently, he kept an illicit diary (as you weren't supposed to write one on active service but he obviously wasn't the only one!) all through France and Belgium, which he gave to his younger sister on his return but we don't know if it still exists.

After that, he went to Morecambe and then Launceston before being sent to the war in North Africa, Dad thinks as a Bren gunner. He was at Gazala and the retreat into Egypt and then badly wounded in the leg by shrapnel at some point in the 1st Battle of El Alamein. Lance Corporal James Frederick Secker was killed by the same shell and is buried at El Alamein cemetery according to the CWGC website (also from South Bank).

Johnnie was sent back to the front to Tunisia, somewhere on the Mareth Line where he suffered shell shock - not surprising considering earlier events. Thereafter, he was shipped out to Sicily and you know the rest." [Johnnie was killed during operation Husky in Sicily, July 1943 - Ed].

When he first signed up with the Terriers, he was with Eddie Mitchell from Normanby, John Joy from Middlesbrough and Eric Robinson, from Surrey Street in South Bank, whose dad was a coal man. Dad seems to think Eric went AWOL before embarkation for France."

A great photo of Green Howards with some of their beloved 'three-tonners'. Probably North Africa 1942, judging by Johnnie's war story.

Johnnie's niece, Jack, says: "I think Johnnie is the one standing to the left of the tallest chap at the back. The smile is like the one on the 'official' photo and the ears look like my dad's! [Johnnie's brother] 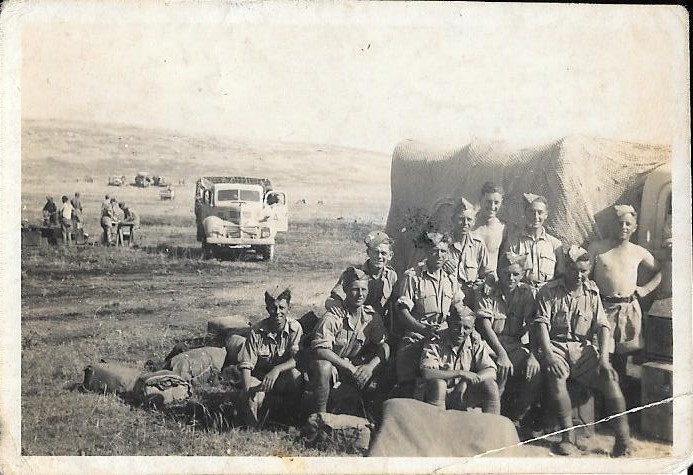 The telegram was received by Johnnie's brother from his sister Joyce while he was on tank training at Bovington Camp in Dorset in Aug 1943, telling him of their brother's death in Sicily. 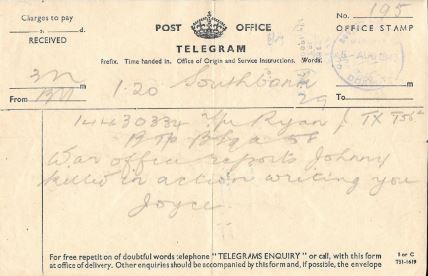 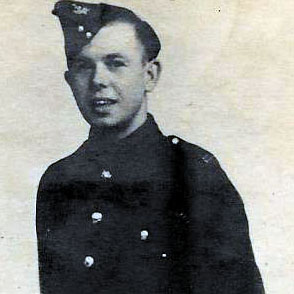 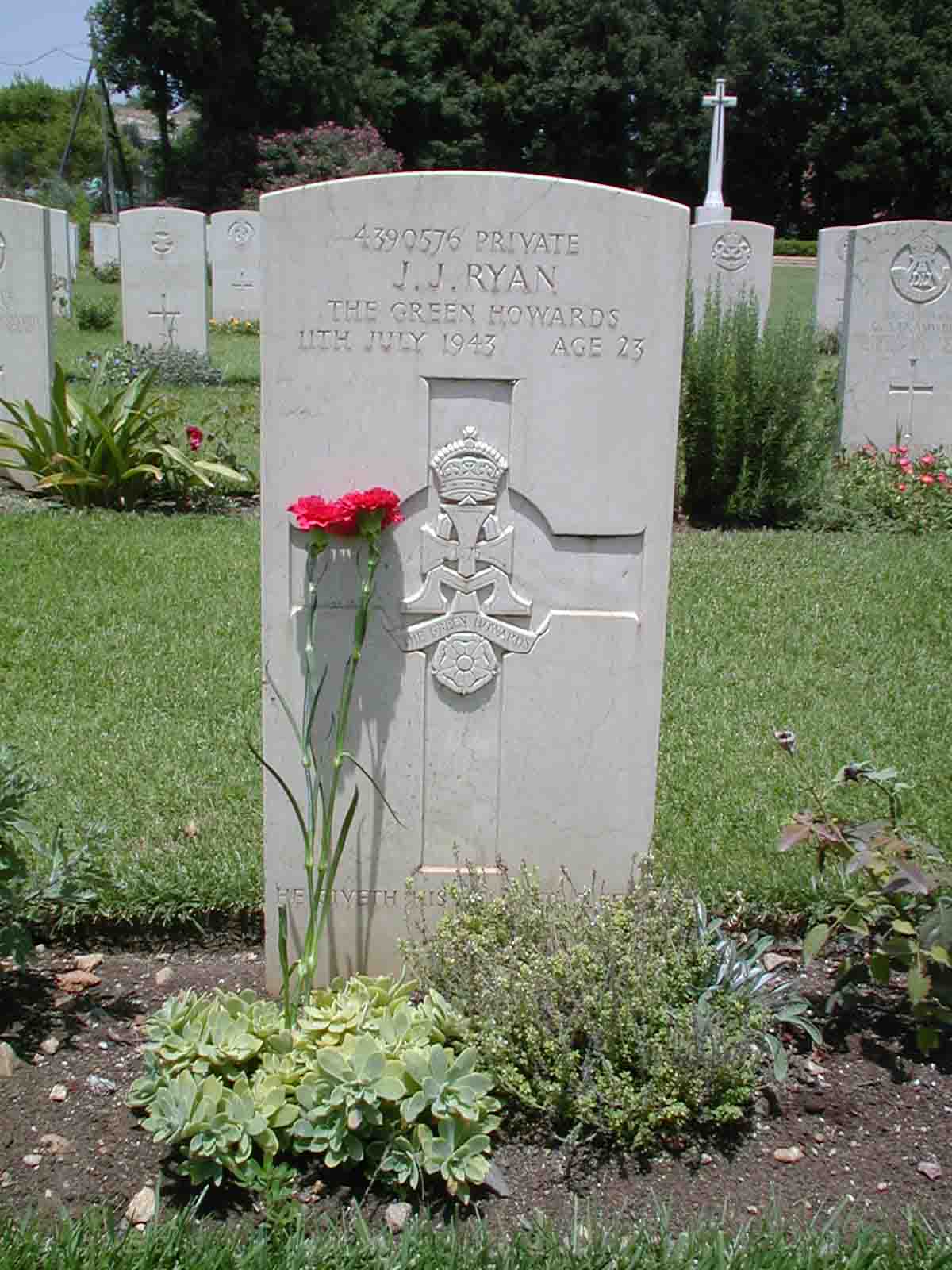